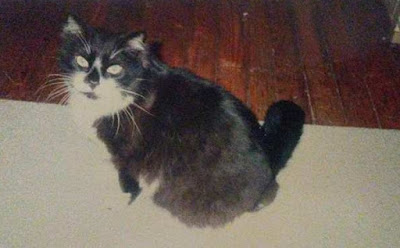 I have always loved words. I spend a lot of time looking into etymology and why certain phrasings are used. Things in my life were not always of a rational nature to my young mind and people could be cruel, but words were solid.

Words gave you stories and what is life without stories?

But, I did say something about a cat. 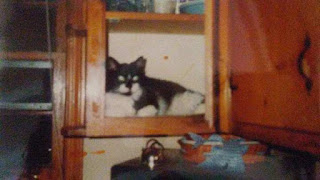 I remember when I was quite young my mother had brought home a kitten. He was a tiny thing, smallest in the litter in fact. I had learned that was called the runt. Of course I knew all about runts, my favorite book at the time was Charlotte's Web.

He was black and white, with bright green-yellow eyes and cute little tufts of white hair behind his ears. We called them his wings.

I asked my mother then what his name was. And she said, Lagniappe. Well what she actually said was, "Lanyap." It just so happens that Lagniappe is how such a sound is spelled. Now this name was strange at the time, but it hit off the ears in a fun way that a child can appreciate. As the years went on it was something that was as natural as saying Spot, or Billy.

It was always something that was hard to say to people because it was almost immediately followed by some version of, "What?"

It taught me other people's relation to words.

The word itself is a Louisiana French adaptation of a Spanish word. In it's simplest form it means, a little something extra and he certainly was. He ended up growing to be a huge cat. He could have easily hurt someone or something if he wasn't also the most gentle creature I have ever known in my life. 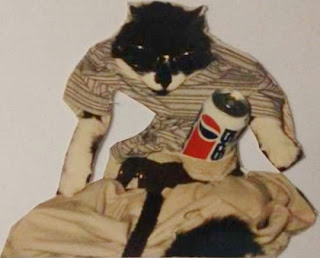 He would let us dress him in clothes and pose him for pictures. He could often be found sleeping on his back in a bed with the covers pulled up to his chest. If you were sick or sad, he was there. He was our little guardian. He was not a pet, he was family.

"So, interesting story, what does this have to do with you as a man?"

Well, besides giving me a companion when I often needed one, he was also inspiration. I remember in the second grade the teacher passed around these hardback notebooks. The pages inside were blank and the instruction was to write and illustrate a book about anything we wanted.

I didn't have to think. I was instantly writing away about my amazing cat. The pictures came easily because I often spent time with my furry friend. I learned in that moment that a person made stories happen. That I could make stories happen.

I know for sure the book was terribly simplistic and the art, while showing a budding talent, would win no awards, but it was a start. It was the beginning of a love for things that would stay with me the rest of my life. 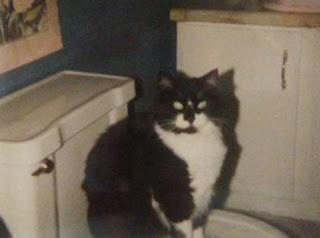 Lagniappe lived quite a long life as far as cats go. He lived long enough to meet my first born. Life eventually takes its toll on us all and he had finally slowed down by my early twenties. His last year was spent staring out the window of a white house. Birds chirping in a thick tree capturing his attention even when his body could no longer run around with them.

When he passed, I remember feeling such a loss. Thinking of him now I get the dull ache that one often gets when they remember a loved one no longer with them. Both my mother and I have entertained writing books about him because he was that wonderful. Neither of us have, and I often wonder if it is because we fear we could never capture just how truly amazing he was. Even if they were not about him, I did end up writing more books. I like to think my feline brother set me on that path.

Anyway, thanks for listening. I hope everyone is doing well. Talk to you soon.

(My mother and daughter with Lagniappe) 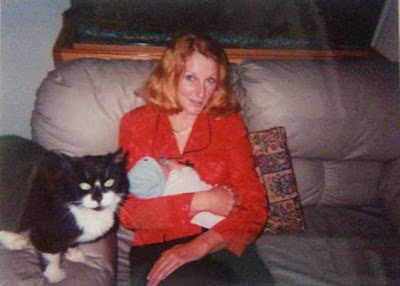